Norton Vs Shavers-Mar 23rd, 1979
These fighters finally met near the end of both their careers. Ken Norton had lost his world title 2 fights before and came into the ring with a record of 41-5 with 33 knockouts. His last fight had been a KO victory over Randy Stephens. Norton had lost the title fight in a close decision and would love to get another chance at Larry Holmes. Earnie Shavers was still a formidable foe with big power. He had won his last 3 fights by KO over Harry Terrell, John Girowski and Harold Carter. Shavers had a record of 57-7-1 with 54 knockouts. This fight would put one fighter in position for the world title and the other in a position to retire. Let's see what happened.

Round 1- The fighters start out measuring each other. Shavers tries to pin Norton against the ropes and fire shots. Norton lands a nice left hand to Shavers cheek. Shavers comes back with a left and right uppercut. Norton is hurt, he's in big trouble. Shavers moves in and lands another uppercut and NORTON IS DOWN, KEN NORTON IS DOWN. He rises at the count of 6 real rubber legged. Shavers goes forward and scores with a huge right uppercut, NORTON IS DOWN AGAIN. The referee stops it, Earnie Shavers wins by a fabulous first round TKO.
Shavers-TKO 1 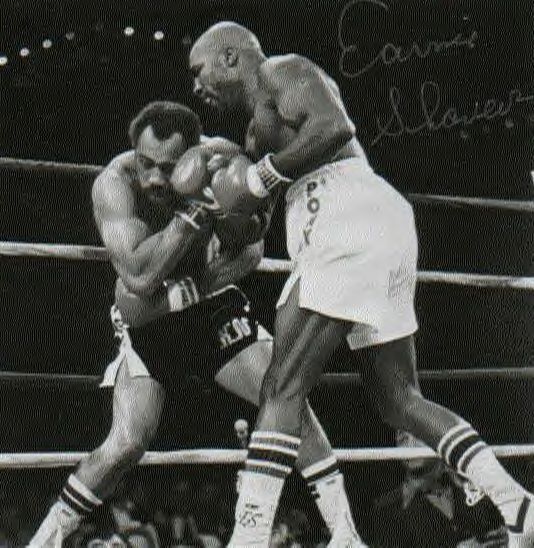 With Earnie Shavers fighting anything could happen because of his huge power. Shavers landed several shots and Norton was going backward from the very start. Ken Norton was not a backward fighter and this was a problem for him against the huge punchers of the division. He didn't adapt well to going backwards, and if he went forwards, he would be playing into the punchers hands. Earnie Shavers got a title fight against Larry Holmes soon after this fight and would show his huge power again in one last hurrah. Ken Norton was effectively finished and went 1-1-1 in his last 3 fights to end his great career.