Ali Vs Norton III-Sept 29th, 1976 N.Y
This was the third fight in this great series.Ken Norton was very sure he could beat Muhammad, because he had beaten him before and his style was perfect to beat Ali. When Ali jabbed Ken jabbed and Norton was always a good body puncher, the one place where Ali was open. Ken Norton was on a 7 fight winning streak and had just come off victories against Ron Stander and Larry Middleton. Ken had a ring record of 37-3 with 30 knockouts. Muhammad Ali was making his 7th straight title defense and had just beaten Jimmy Young and Richard Dunn. Ali had a record of 52-2 and wanted to win this rubber match. Ali knew this would be a tough fight and was in good shape for the contest.Let's see how these two faced off for the world title.

Round 1- Norton comes out moving forward. Nothing really happening yet as both fighters measure each other. Ali lands a few small shots. Ali forces the action more at the end of the round landing good shots and controlling the action with his quickness. Ali's Round- 10-9

Round 2- Norton pressing forward and jabbing well with Ali. Nice jabs to the body from Norton, Ken is staying real bust this round while Ali not doing much and content with covering up.
Norton's Round- 10-9  (19-19) even

Round 3- Norton jabbing to Ali, Ali returns the favor. Norton scores to the body, but Muhammad comes back behind a nice jab. Norton trying to pick the pace up a bit near the end of the round.
Even Round- 10-10  (29-29) even

Round 4- Good right from Ali to begin the round. Combination from Ali landed, Ali is giving no angle for Norton to land. Norton moves forward and lands a real good right, Norton moves in well and scores with a series of shots, tough close round. Norton's Round- 10-9  (39-38) Norton

Round 5- Nice body shot from Norton. Norton doing great work while Ali is against the ropes. The rope-a-dope won't work with Kenny. Ali trying to fight off the ropes but is getting caught by good shots in this round. Norton's Round- 10-9  (49-47) Norton

Round 7- Norton moving forward and digging body shots. Good left reply from Ali, Ali lands a nice right and he is scoring better this round and is starting to fight better as he usually does in the middle rounds.
Ali's Round- 10-9  (68-66) Norton

Round 8- Ali lands a combination early in the round then sinks into the corner. Norton digs vicious shots Ali's body and Ali covers up low. Norton lands a good left hook to Ali's jaw and follows with a good right as well. Norton's Round- 10-9  (78-75) Norton

Round 9- Ali comes out on his bicycle for the first time and does the Ali shuffle. Ali not really landing while he is moving  but neither is Norton. Nice right hand from Ali, Norton frustrated by Ali's movement. Big right hand from Norton but Ali more busy. Ali's Round- 10-9  (87-85) Norton

Round 10- Ali moving again, Norton is not able to get to him. Norton jabs to him and lands good body shots. Ali still doing better with his movement and keeping the challenger of balance.
Ali's Round- 10-9  (96-95) Norton

Round 11- Norton wades in then changes up and does the rope-a-dope himself. Ali looks bewildered when he can't land. Norton coming forward and Ali fending him off with straight rights. Ali with a right to Norton's head, but Ken comes back with a big right that has Ali holding. Norton ends with effective jabs.
Even Round- 10-10  (106-105)

Round 12- Norton lands a nice jab, Ali strikes back with a combination. Norton lands a huge right that buckles Ali's legs. Norton landing while Ali is against the ropes. Norton is effectively aggressive, Ali seems to inadvertently thumb Norton in the eye and Ken paws at his eye to end the round.
Norton's Round- 10-9  (116-114) Norton

Round 13-  Nice right hand to start the round from Norton. Jabs from Norton and good shots from Ken to Ali's belly. Right from Ali momentarily stuns Norton, Ali is moving his hands and landing. Norton fires back, but Ali is landing the cleaner blows late in the round. Close round, Ali coming on strong late.
Ali's Round- 10-9  (125-124) Norton

Round 14- Nice jab from Norton to begin the round. Norton lands to the body. Ali strikes back with quick left right combinations, Ali is taking the fight to Norton in the middle of the ring. Ali is coming on late in the round again. Norton lands a big right to end the round. Ali's Round- 10-9  (134-134) even

Round 15- Norton comes forward and Ali is jabbing and moving. Norton lands a huge right which stops Ali momentarily. Ali is moving but not connecting at all. Norton is pushing forward and lands a big right and is flurrying at the bell to win the round well. Norton's Round 10-9  (144-143) Norton is my decision. 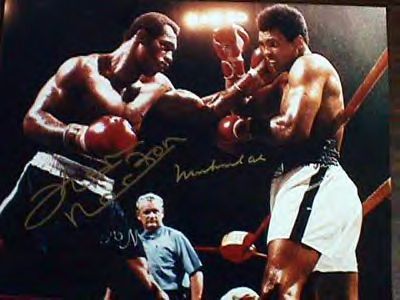 This fight was a barn burner the whole way. I had Norton winning the fight and I watched it two times and scored the exact same way both times. The official score and mine were one round off so I figure maybe round 11 or 3 was scored for Ali, but I feel good with my decision. One round is all it took to sway this fight. Muhammad Ali had a couple more title defenses in him before he retired and came back to try to win the title again. Ken Norton was very upset with the decision and really though he one this fight. Honestly he could say he won all three if he wanted to. The ones he lost were really that close and Ken Norton was toughest fight for Ali. I realize many people say it's Joe Frazier, but Ken Norton just had the style that Ali could not whip. Norton would get a title under strange circumstances when he won an elimination bout with Jimmy Young and Leon Spinks wouldn't fight him. These three fights were legendary.