Holmes Vs Shavers II Sept 29, 1979
Larry Holmes and Earnie Shavers were to wage war for the second time a year after Holmes had won an easy 12 round decision over Shavers in an elimination bout. Holmes was a surprise to many in the crowd that night with his ease in dispatching of the awesome punching Shavers. Shavers was unable to find Holmes on that night as Larry boxed rings around him. Earnie had just come off 5 straight knockout wins that all were over inside 4 rounds. He beat some average fighters like Eddie Porette and Harold Carter, but he also destroyed Ken Norton in one round to give him his second shot at Holmes. Earnie's record was 59-7-1 with 56 ko's heading into the bout. Larry Holmes was undefeated with a record of 31-0 before this fight. Holmes had beaten Norton for the title a year earlier and had just come off of wins over Ossie Ocasio and Mike Weaver. Holmes wasn't thought of being a hard puncher, but all of his title defenses were won by a knockout. Let's see if Holmes had an easier time with Earnie this time. 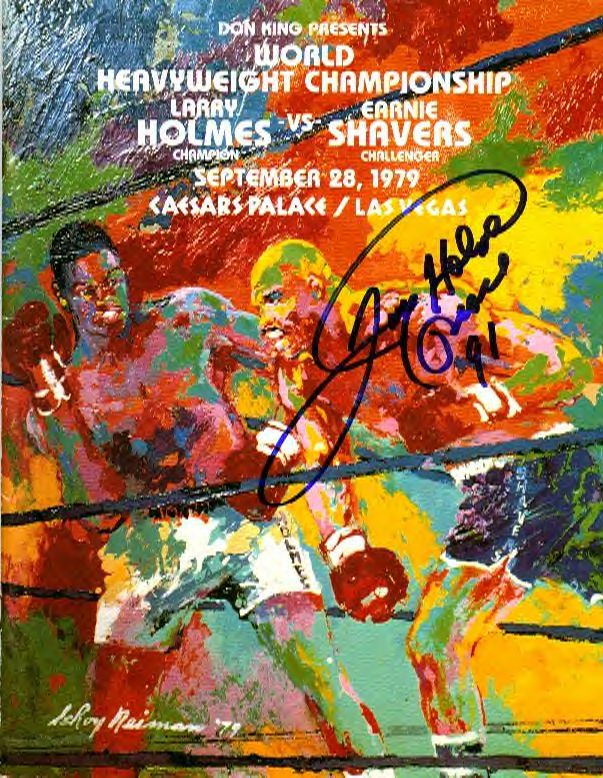 Round 1- Holmes starts with his great jab to Shavers head, Shavers is a little wild early and not effective. Shavers throws his huge right and hits all air, Holmes busier this round. Holmes's Round- 10-9

Round 2- Holmes comes out jabbing again and snapping back Earnie's head. Holmes is so effective with that long jab. Shavers can't even get off his shots yet. Shavers wades in but can't land flush.
Holmes Round- 10-9  (20-18) Holmes

Round 3- Holmes is on his bicycle and moving well to start. Shavers is throwing more punches but still not landing yet. Holmes controlling the fight well. Shavers lands with a nice right to the body, the fight is starting to open up a bit. Holmes Round- 10-9  (30-27) Holmes

Round 4- Holmes with great crisp jabs to open the round. Shavers missing wildly, these rounds all look very much the same. Holmes lands a good right uppercut, Shavers just can't get started. Holmes stuns Shavers with a good right. Holmes Round- 10-9  (40-36) Holmes

Round 5- Holmes looking to set down his punches. Shavers closing the distance and doing better getting in. Holmes stuns Shavers with uppercuts. Holmes has caused a cut to Shavers eye near the end of the round. Holmes Round- 10-9  (50-45) Holmes

Round 6- Holmes on his bicycle again, Larry Holmes is putting on a show. Great boxing lesson, Holmes is scoring well. Holmes almost gets caught with a big right. Shavers starting to throw caution to the wind. Shavers eye is being picked apart by Larry's jab. Holmes Round- 10-9  (60-54) Holmes

Round 7- Holmes comes out a little slower but still jabbing. Shavers cuts are getting bad. Shavers lands a clubbing right. Shavers lands another big right and stuns Holmes. Holmes trying to move away. Shavers lands a colossal right, right on the button, HOLMES IS DOWN. Holmes is up at the count of 4, there is about a minute left. Holmes is wobbling all over the ring. He's hit with another right. He barely escapes the round, the crowd is going crazy. Shavers Round- 10-8  (68-64) Holmes

Round 8- Shavers comes out slowly. he may have punched himself out. Holmes moving around the ring on his toes. Shavers lands to the body. Holmes lands a good right, now Shavers is stunned and real tired. Holmes Round- 10-9  (78-73) Holmes

Round 9- Jabs from Holmes, a right from Larry, Shavers is hurt against the ropes. Holmes with a great uppercut. Shavers is wobbled, Shavers knocks down Holmes out of nowhere with a quick right. The referee rules it a slip, questionable call. Holmes Round- 10-9  (88-82) Holmes

Round 10- Shavers is wobbled by a quick right, he's exhausted. Holmes is hitting Earnie with every shot in the book. Shavers with a combination, Holmes lures him in and clocks him with a right, what a war!
Holmes Round- 10-9  (98-91) Holmes

Round 11- Shavers is out on his feet. Holmes stuns Shavers with another uppercut, Shavers is in bad shape, Shavers getting hit with great combinations, the referee steps in it's over. Holmes is the winner.
Holmes TKO-11 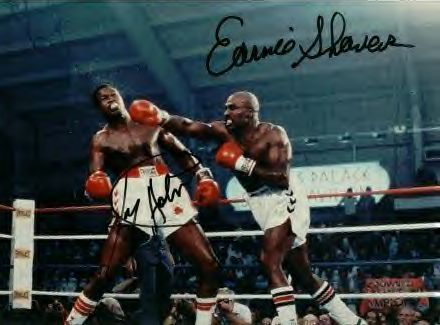 This fight was an incredible test of wills. Although Holmes won nearly every round, he was tested and hit with one of the best punches I've ever seen. The right hand that Shavers hit Holmes with in the 7th round was a punch for the ages, and even more incredible was that Holmes got up and went on to win the fight. Larry Holmes after this went on to defend his title 16 more times and prove himself as one of the great ones with an iron chin. Shavers was effectively done after this fight. He fought 20 more times with a record of 14-6 with 10 ko's but was never again a factor in the heavyweight division.