Frazier Vs Ellis-Feb 16th, 1970 N.Y
Joe Frazier and Jimmy Ellis were in strange positions before this fight. They both could say they own the heavyweight title. Ellis had won the WBA elimination tournament by defeating Leotis Martin, Oscar Bonavena and Jerry Quarry to win the WBA title. Frazier had won the New York State title by defeating Buster Mathis. In 5 states Frazier was recognized as the champion, and in the rest of the country it was Ellis. Jimmy Ellis had won 11 straight fights after defeating Floyd Patterson to retain his title. His record stood at 26-5 and he was looking to claim the Championship all for himself. Joe Frazier was coming off wins against Oscar Bonavena, Dave Zyglewicz and Jerry Quarry to set himself up for his shot at Ellis. Frazier's record was 24-0 with 21 KO's going into the contest. Frazier was a 4-1 favorite, let's see if it was justified. 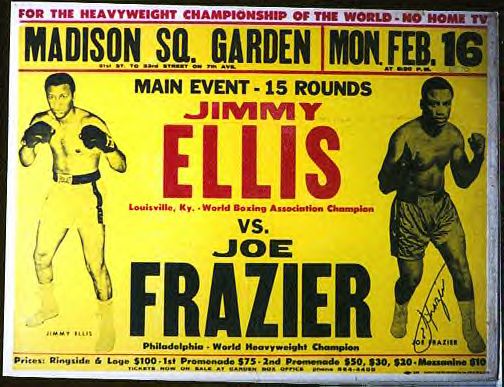 Round 1- Ellis comes out jabbing. Frazier misses with his huge left hook. Ellis lands a nice right to Frazier's jaw. Ellis lands another right, Frazier digs a left hook to the body. Ellis jabs well to end the round, good work from Ellis. Ellis Round- 10-9

Round 2- Ellis lands a nice jab. Frazier looking to step inside, but Ellis is tying him up. Frazier is near butting on the inside and the referee warns him. Frazier swarms inside and lands two nice hooks, Ellis is staggered a little bit. Close Round. Even Round- 10-10  (20-19) Ellis

Round 3- Ellis is snapping the jab and right combination. Good hook from Frazier. Frazier nails Ellis with a hook and Ellis is holding, Frazier lands well. Another huge left hook, Ellis is really hurt and staggering. Frazier is wailing away with hooks, great action. Frazier's Round- 10-8  (29-28) Frazier

Round 4- Ellis begins with a good right, he ties up again fast before Joe can fire a hook. Ellis a nice uppercut. Frazier digs to the body, then to the head, they are fighting on the inside. Ellis lands a nice right, Frazier lands a nice right as well. Frazier a classic bombing left hook. ELLIS IS DOWN. Ellis gets up at the count of 7. Another beauty of a hook from Frazier, DOWN GOES ELLIS FOR THE SECOND TIME. The bell sounds and Ellis is saved. Frazier's Round- 10-7  (39-35) Frazier

The trainer for Ellis tells him he's stopping it. Joe Frazier can now really say he's champion of the world!
Frazier-TKO 4 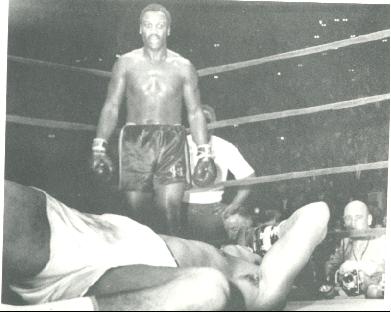 Frazier won his title with his vaunted hook, and Ellis just couldn't escape it. Frazier was on the way to fighting in many classic bouts including 3 against Muhammad Ali. Ellis would never again fight for the title but would be on the heavyweight scene for another 5 years. Frazier was showing the pressure and punching that would give him the nickname Smokin Joe.