Ali Vs Frazier III-Oct 1st, 1975 Manila
This was the fight that would determine the probable winner of the Ali-Frazier series. After Frazier won the first world title bout in 1971, Ali came back and won the rematch in 1974 to even the series. The relationship between the two combatants had become more and more bitter. Ali had called him ignorant and everything from an "Uncle Tom" to "The Gorilla". Frazier had a lot of pride and was very upset by the derogatory remarks even though he knew much of it was showmanship on Ali's part. Ali had his fans in Manilla, but this wasn't "The rumble in the Jungle." Frazier's support in the crowd equaled Ali's it seemed. Ali was the World Champion making his 4th defense after shocking the world in Zaire against George Foreman. Ali had beaten tough veterans Chuck Wepner, Ron Lyle and Joe Bugner in his previous three outings and his record was at (48-2). Frazier was coming off knockout wins against super '70's fighters Jerry Quarry and Jimmy Ellis and his record was (32-2). The stage was set for one of the greatest fights of both fighters careers.

Round 1- Ali jabs early and lands some nice straight right hands. Frazier pours in but is being blocked effectively. Near the end of the round Ali shakes Frazier up with a hook that wows the crowd. This was a great start for the champ. Ali's round- 10-9

Round 2- Not much action early in the round, Ali circling, Frazier missing. Ali starts hitting Joe with straight rights again in the middle of the round. Frazier lands a couple hooks, but is still being outworked by the fast starting Ali. Ali's Round- 10-9  (20-18) Ali

Round 3- Ali lands some shots early, furious pace, Frazier digs to the body while Ali covers up. Frazier lands some nice hooks to finish the round, Frazier looks to be starting to smoke.
Frazier's Round- 10-9  (29-28) Ali

Round 4- They trade early in the round, Ali scoring a little more effectively. Ali is busy and scoring again this round, Frazier lands some nice hooks to the body. Ali controls the round with superior hand speed.
Ali's Round- 10-9  (39-37) Ali

In Between rounds 4 and 5 Ali stood and led his own cheers. To cheers and boos.

Round 5- Evenly fought early, Ali still getting in the cleaner shots. Frazier still digging to the body with his left. Frazier lands a nice hook near the end of the round, but Ali holds his ground, he sure can take a punch. Ali's Round- 10-9  (49-46) Ali

Round 6- Frazier lands his best hook of the fight seconds into the round. He lands another and has Ali slightly hurt for the first time. Frazier is just ripping shots and looking great, Ali might not have landed 10 punches the whole round. Frazier looks like he is starting up. Frazier's Round- 10-9  (58-56) Ali

Round 7- Ali comes out dancing a little. Frazier lands a rare big right, no real damage though. Ali starts to be busy again, which slows down Frazier. Ali outworks the couple of big punches Frazier landed.
Ali's Round- 10-9  (68-65) Ali

Round 8- Ali lands a 5 punch combination, he may have Joe hurt, Joe keeps pressing forward anyway. This fight is turning into a classic, Frazier fires back pinning Ali against the ropes and slugging away.
Even Round- 10-10  (78-75) Ali

Round 9- Frazier is real aggressive crowding early in the round. Round is slower paced then the previous few, Frazier gains the advantage through sheer aggressiveness. This fight is getting real close late, just like the first one. Frazier's Round- 10-9  (87-85) Ali

Round 10- Ali lands and he is fighting flat-footed at the outset of the round. Ali is dominating the round with short crisp shots, Frazier still bores in, he is getting popped good in this round though as Ali gets his second wind. Ali's Round- 10-9  (97-94) Ali

Round 11- Ali does have his second wind and comes out firing, Frazier is having trouble dodging shots now, he comes back and nails Ali with 3 or 4 hooks. They are trading shots with no caution, WOW!!
Ali's early work gives him the round. Ali's Round- 10-9  (107-103) Ali

Round 12- Ali comes out blazing again, Frazier is hit with 6 straight punches and is bleeding from his mouth. Ali is outworking and out quicking Frazier in these rounds which differs from the first fight.
Ali's Round- 10-9  (117-112) Ali

Round 13- Early action a little ragged, nothing landing. Ali then comes with a wicked right and is hurting Joe with every punch. Ali's best round of the fight, staggers Frazier again, Joe has slowed down considerably. Ali's Round- 10-9  (127-121) Ali

Round 14- Both fighters are exhausted but Ali is firing shots still. Frazier is real hurt from an Ali combination and is almost defenseless. He tries to comeback but seems out on his feet. Big round for Ali.
Ali's Round- 10-9 (137-130) Ali

Frazier is told by his corner man Eddie Futch that he is stopping it after the 14th round. Joe tries to persuade him to let it go the distance but the is told it's over. Frazier and Ali embrace before Ali slumps to the canvas in exhaustion. ALI TKO 14. 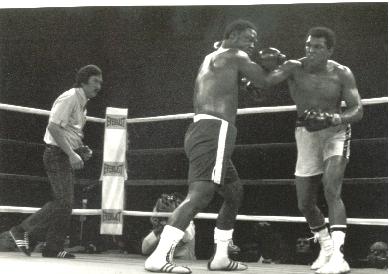 Muhammad Ali after this fight goes on to defend his title 7 more times before losing to Leon Spinks. Many in Ali's camp tried to persuade him to call it quits after this brutally tough fight that left him in bed for days. Frazier would fight once more and get beat by George Foreman again before trying a comeback in 1981 that lasted only one fight. "The Thrilla in Manilla" left President Marcos and everyone watching with the impression of two warriors who were evenly matched and made for a fight that will live forever.