Ali Vs Frazier II-Jan 28th, 1974 N.Y
Muhammad Ali and Joe Frazier were set to fight nearly 3 years after their first encounter. The hype wasn't as big for this fight because it wasn't for the world title, but for the NABF Title that Ali held. Muhammad Ali was on a modest two fight winning streak after avenging his loss to Ken Norton by defeating him, then defeating lightly regarded Rudi Lubbers in Indonesia. Muhammad Ali wanted to avenge his only other loss and this was his chance to do it. Ali had a ring record of 43-2 and wanted to get the World title back and this would give him a chance to do it. Joe Frazier had suffered his first loss two fights ago in a shocking two round annihilation at the hands of the new champion, George Foreman. Joe had come back in his last fight to beat Joe Bugner in London and wanted another chance at Foreman to win his title back. He would have to beat Ali to do it. Joe had a record of 30-1 before this fight with 26 knockouts. Let's see who wins the rematch of the two former champions.

Round 1- Ali on his toes moving back and forth and landing little uppercuts and rights. Frazier going forward but not landing yet. Ali keeping Joe at bay with the jab and quick shots as he dances away from Joe. Ali's Round- 10-9

Round 2- Ali on his bicycle moving fast. They trade little left hooks, Frazier not landing solid yet. Frazier lands his first nice left hook and Ali holds on the inside. Ali stuns Frazier with a quick right, Frazier is hurt! Referee inadvertently breaks the fighters thinking the round is over. He's wrong and Ali can't take advantage of Joe in the last 15 seconds after they go back to fighting.
Ali's Round- 10-9  (20-18) Ali

Round 3- Ali landing well with nice short punches on the inside. Joe just keeps coming forward. The pace slows and not much landing, Frazier then digs three good body shots as Ali covers up.
Even Round- 10-10  (30-28) Ali

Round 4- Ali landing a little as Joe moves forward. Frazier lands a nice left hook and Ali holds again. Frazier is much more aggressive this round and that gives it to him.
Frazier's Round- 10-9  (39-38) Ali

Round 5- Frazier comes in and takes two shots but lands a nice left hook. Ali is a little shaken from that punch but dances away. Ali is moving back the whole round as Joe stalks and delivers the better shots, though not hurting Ali again this round. Frazier's Round- 10-9  (48-48) even

Round 6- Ali throws a quick combination but misses most of his shots. Frazier lands a good left hook, but misses another. Ali lands a nice left, right combo and Ali is sticking and moving well this round. Ali using the ring well and is effective in stopping Frazier on his way in. Ali's Round- 10-9  (58-57) Ali

Round 7- Frazier presses forward, Ali holds. Frazier lands a big left hook, then another, Ali is shaken and the crowd roars. Frazier landing good digging body shots as Ali tries to hold. Ali trying to fight back but Joe lands another hook as the round ends. Frazier's Round- 10-9  (67-67) even

Round 8- Ali opening fast and lands some jabs. Frazier lands a couple nice hooks, he's starting to land consistently. Joe gets inside and the crowd boos Ali's constant holding. Frazier digs to the body, you can hear the thud. Ali fires a combination that scores at the end of the round.
Frazier's Round- 10-9  (77-76) Frazier

Round 9- Ali lands as Joe pours in. Joe swarms in again and Ali lands 3 straight combinations, great work here from Ali. Frazier lands a hook and Frazier is getting a little careless going in. Frazier does land a left hook, but takes 4 shots on the way in. Ali's Round- 10-9  (86-86) even

Round 10- As the crowd chants Ali, Frazier is the one that is punching and lands a nice hook. Frazier digs again to the body and lands a rare jab himself. Frazier lands a nice left hook and both fighters appear to be slowing down a little. Frazier's Round- 10-9  (96-95) Frazier

Round 11- Frazier opens with a right and left hook. Ali lands a nice straight right and blocks some Frazier punches. Frazier still swarming forward. Ali is boxing on his toes and doing well now, Ali lands some crisp punches to the onrushing Frazier's chin. Ali's Round- 10-9  (105-105)

Round 12- Frazier comes out charging and both fighters land a bit. Ali is on his toes and grabbing as Frazier comes in. Frazier working more on the inside with body punches. Frazier lands two nice left hooks and Ali strikes back with a couple straight rights. Close even round.
Even Round- 10-10  (115-115) a draw is my decision.

I don't know what the judges scores were, it wasn't announce, but this was one close fight. I heard a commentator say in a different fight that Ali won the last 3 rounds to win the fight. He definitely didn't win the 10th round and the 12th round could have gone either way. I feel very safe with my draw decision and can see how it could go either way a point or two, but not on my card. Muhammad Ali would use this fight as a springboard to get his title shot and shock the world like only Muhammad Ali could do. Joe Frazier would have more big fights, but would never again be the same fighter in my opinion he was a step slower after this fight. These fighters waged true war, and it is the reason that boxing is the best sport on the planet. There is more will and courage in these three fights then decades of other sports combined. 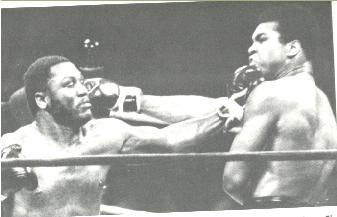