Foreman Vs Frazier-Jan 22nd, 1973
A fight between two fierce punching undefeated fighters for the World Heavyweight Championship, that's about as good as gets. George Foreman was the challenger and the 2-1 underdog in the fight. George had a record of 37-0 with 34 knockouts. His best wins had come against top 10 fighters Gregorio Peralta(twice) and George Chuvalo. This was decent competition, but he was taking a HUGE step up in class to fight Frazier. Foreman had just come off wins against Miguel Paez and Terry Sorrels. Joe Frazier had a great record and had beaten everyone in the heavyweight division that had been a contender in the last 60's. Frazier owned thrilling wins over Muhammad Ali, Jimmy Ellis and Jerry Quarry. Frazier's ring record looked like a who's who of the heavyweight division. Frazier had a record of 29-0 with 25 knockouts, and was clearly the more proven fighter. Frazier's last two opponents were Terry Daniels and Ron Stander, two fighters that were very average compared to a fighter liked George Foreman. Let's take a look at this fight.

Round 1- Frazier lands a decent left hook to start the fight. Foreman lands a little uppercut and they exchange jabs. Foreman catches Frazier with a stabbing right uppercut, FRAZIER GOES DOWN. Joe Frazier is sent down to the canvas in the very first round. Frazier rises at the count of three. Foreman moves and lands three huge shots to Frazier's chin. He's bobbin right into the power punches of Foreman. Foreman lands another big right and Frazier is wobbling. Foreman lands a huge straight right and FRAZIER FALLS AGAIN!!! Joe gets up again is trying to move away. Foreman pushes forward and looks for the kill, he lands another huge right uppercut, FRAZIER FALLS DOWN AGAIN!!! He rises at the count of 6 and goes wobbly back to his corner. Foreman's Round- 10-7

Round 2-Foreman is jabbing and lands a colossal right hand. FRAZIER IS DOWN AGAIN! Joe Frazier is not able to avoid these huge shots from George. George is going forward, he looks unstoppable he lands two vicious uppercuts, FRAZIER FALLS DOWN TO THE CANVAS FOR THE 5TH TIME. Frazier rises unaware seemingly of his surroundings. Foreman comes forward and throws big shots to Frazier's chin. JOE GOES DOWN AGAIN. He gets up at the count of 7 but the referee stops the fight and George Foreman is the new champion. Joe Frazier is unable to continue, George Foreman wins by second round TKO. Foreman-TKO 2 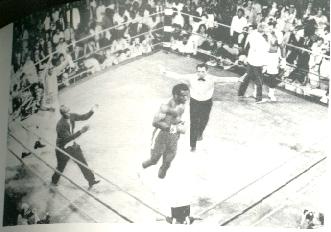 If there was ever anyone that looked unstoppable it was George Foreman on this night. He wasn't destroying Boone Kirkman or Ted Gullick, this was one of the best fighters of all time Joe Frazier. Foreman showed his complete arsenal in one of the most dominating fights in history. Frazier had no defense because he had to get inside to get his shots off and Foreman was pot shotting Joe as he came in. George Foreman was king of the world. Joe Frazier would never again be world champion, but would several more great fights in his career, although he would only go 3-3-1 in the last seven fights of his career. Foreman would look awesome again in his next two performances until meeting Muhammad Ali and the rope-a-dope. After this Foreman would continue a great career with some more firework laden performances. 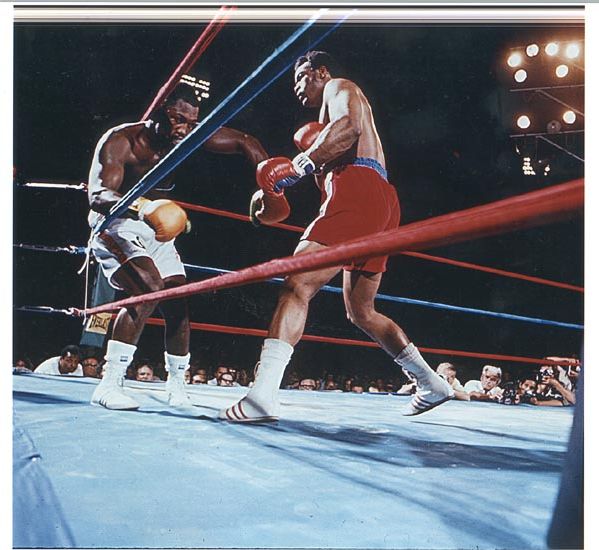