Ali Vs Foreman-Oct 30th, 1973 Zaire
Muhammad Ali and George Foreman engaged in a struggle that would be called the "Rumble in the Jungle". Ali was already a legend in Zaire and had almost unanimous support from the people of the country. Foreman was cut in pre fight training which led to a 6 week postponement. This didn't help George who hated the country and the fact that no one was rooting for him. Foreman was thought to be indestructible the way Sonny Liston was 10 years earlier. Foreman was (40-0) and had just come off short knockouts of super fighters Joe Frazier and Ken Norton. He also dismantled Joe Roman in one round. Foreman was a super puncher and most of the betting public thought he would wipe Ali out too. Foreman was made a 7-1 favorite, much like Liston was a decade earlier. Ali was on a little streak of his own having just beaten Joe Frazier over 12 rounds and beating Rudi Lubbers. Before these fights he had won his rematch with Ken Norton. This fight is for the world title that Ali hasn't had since 1968 when it was taken away from him. The stage was set for one of the great performances in boxing history.

Round 1- Ali comes out on his bicycle and connects with hard right hands and some nice clean jabs. The pace is fast for a first round with Foreman coming back and delivering some nice body shots near the end of the round. Ali controls the round with accuracy. Ali's Round- 10-9

Round 2- Foreman wades in and lands a couple good punches to start the round. Ali counters with some nice 1-2 combination punches to Foreman's eye. Ali scores late in the round well, the fans are screaming "Ali Kill" in their native language. Ali's Round- 10-9  (20-18) Ali

Round 3- Ali lands a nice cross early and Ali shows the beginning of the rope a dope style. The ropes are very loose which allows Ali to force Foreman to punch him at odd angles and takes away leverage. Ali is connecting with combinations and is forcing the action although backing up. Foreman lands a great right hand that momentarily shakes up Ali. Ali comes back with a good combination to end the round and secure it. Ali's Round- 10-9  (30-27) Ali

Round 4- Ali staggers Foreman with a beautiful combination early, Ali's fast hands are stopping Foreman from getting a rhythm. Foreman is missing wildly, Ali confusing Foreman and landing some nice jabs, the action slows near the end of the round. Ali's Round- 10-9  (40-36) Ali

Round 5- Foreman comes out fast punching to Ali's body. George is pressing the action now throwing big shots and landing a couple. Ali comes back to stun Foreman with a big right hand. Foreman closes the round by unleashing a powerful left hook to Ali's jaw. Foreman's Round- 10-9  (49-46) Ali

Round 6- Ali jabs effectively early in the round. Foreman is starting to look real tired and the action slows again. Foreman is throwing punches but they have lost a lot of steam. Ali counters quick off the ropes and lands some nice combinations to win him the round. Ali's Round- 10-9  (59-55) Ali

Round 7- Action slows considerably, Ali still carrying the action with jabs. Foreman lands a good uppercut, he sure should be throwing more of those, Ali's wide open for them. Ali throws some good straight rights to win another round. Ali's Round- 10-9 (69-64) Ali

Round 8- Ali lands two quick jabs to start the round. Foreman misses wildly and almost falls out of the ring, the crowd cheers wildly. Foreman lands a good right hand behind two jabs, this is the best Foreman has looked all fight! Ali looks tired against the ropes. Ali lands a combination out of nowhere, Foreman is hurt, another left a great ripping straight right. FOREMAN GOES DOWN!!! FOREMAN GOES DOWN!!!, he's not getting up. Ali is the champ, what a performance- KO 8 Ali 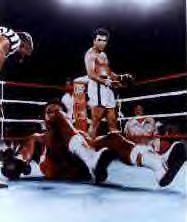 Ali's performance would be called one of the best in the history of boxing. He not only beat the indestructible George Foreman, he outthought, out quicked and outfought him the entire fight. Foreman would not be able to deal with this loss for many years until he came to terms with it after leaving the sport in 1977 after a loss to Jimmy Young. Foreman would make a comeback later and win the title over Michael Moorer in the early 90's. Ali would go on to have several more title defenses and some more thrilling bouts in his career. The people of Zaire and Muhammad Ali both were about as happy as people can get, George Foreman on the other hand got out of the country as soon as possible. Muhammad Ali clinched being called "The Greatest" on this night and shocked the world one more time. 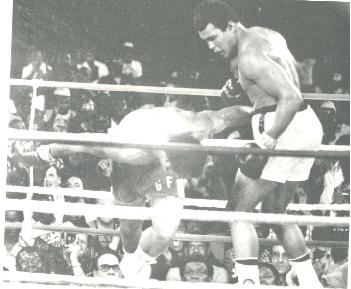