Ali Vs Holmes-Oct 2nd , 1980 LVegas
Muhammad Ali had been retired for a little over 2 years when he decided he was still the true champion. Other then exhibitions Muhammad Ali was far removed from championship form. Larry Holmes was already 35-0 and becoming a great champion in his own right when Ali started calling him out. Holmes was a former sparring partner of Ali and looked at Ali as something of an idol. Holmes was fresh off wins against Lorenzo Zanon, Leroy Jones and Scott Ledoux, all in konckouts. Those fighters were no where near the quality of Ali, but was Ali over the hill? Ali had last fought two contests against Leon Spinks and after losing the first, won the rematch to put his record at 56-3. Ali would be 39 years old for this fight and although he was in excellent condition, everyone wondered if he could turn back the clock against the younger champion Larry Holmes.

Here's the fight as I saw it.-Green are the round scores as I scored it, red is important text like a cut, great punches or knockdown.

Round 1- Holmes comes out fast popping the jab. Ali not throwing any punches yet, just showing good defense. Ali lands a soft right. Holmes getting down to buisness and landing many more punches.
Holmes Round- 10-9

Round 2- Holmes controlling with the jab. Ali still not throwing many punches, but he is slipping effectivly. Both fighters are measuring each other, Ali not busy enough to win any rounds this way. Holmes Round- 10-9  (20-18) Holmes

Round 3- Holmes still coming in with that nice quick jab. Ali just not busy at all. Holmes with a nice right. Holmes landing the right flush now, Ali is taunting Holmes but not alnding anything.
Holmes Round- 10-9  (30-27) Holmes

Round 4- Popping jabs from Holmes, Ali can't get any shots off. Holmes with his great jab landing consistently. Ali needs to start doing something, he's giving all these rounds away.
Holmes Round- 10-9  (40-36) Holmes

Round 5- Holmes comes out agressively, backing Ali up. Holmes is looking strong and menacing, Ali not taking a ton of punishment, but is getting out-worked badly. Holmes with a good right and combination.
Holmes Round- 10-9  (50-45) Holmes

Round 6- Holmes coming out strong, he just looks so fast. Ali doesn't look good at all. Holmes is way to strong and quick. Holmes corners him and nails him with a barrage of punches, is Ali ever going to get going? Holmes Round- 10-9  (60-54) Holmes

Round 7- A chant for Ali from the crowd, but it dies quickly. Ali popping the jab for the first time. He's missing most though. Holmes pins him in the corner again and is scoring well to end the round.
Holmes Round- 10-9  (70-63) Holmes

Round 9- Ali starting to get puffy from the jabs he's taken. Ali takes a huge right from Holmes, then an uppercut he's hurt bad. Ali is showing heart , but Holmes is digging to his body. Ali is taking huge shots now. He's taking tremendous punishment. Holmes Round- 10-8  (90-80) Holmes

Round 10- Holmes sticking the jab, Ali just waiting to get hit in the corner. Big uppercut from Holmes, Holmes teeing off on him, great combinations from Holmes. This fight should be stopped.
Holmes Round- 10-8 (100-88) Holmes

In between rounds Angelo Dundee told the referee that the fight is over. Ali was not getting off his stool to take any more punishment TKO 11-Holmes 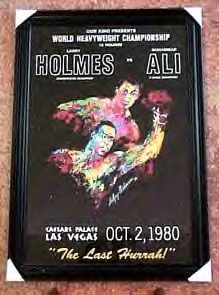 This fight shows how quickly all the skills can go in boxing, The Greatest Muhammad Ali couldn't have beaten many fighters on this day. Larry Holmes proved to himself that he was the true champ, but to see Ali at such a slow pace with skills eroded was hard to do. Ali would fight one more time and lose to the very average Trevor Berbick in the Bahamas a year later. Holmes continued on to put together one of the best title reings and winning streaks of all time. If these guys fought in their primes it would have been a good fight. Ali 13 years past his prime versus Holmes in his prime made for a mismatch that was painful to watch. 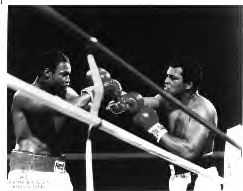